LEAN and mean on his high-fat and low-carbohydrate diet, Professor Tim Noakes now says that sugar may cause more harm than tobacco. 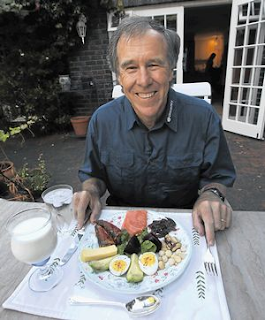 And South Africa's top sports scientist has taken a swipe at the sugar industry as well as the medical profession.

He told the Sunday Times that diabetes in the US - where sugar can make up 25% of a person's daily calorie intake - will bankrupt the country's medical industry within 20 years.

"It has been calculated that the [adverse health] costs are three times the profits [of the sugar industry]. If you track back to the onset of diabetes, it tracks the rate of increased consumption and production of sugar ... I guess they cost the world more than tobacco costs."

According to reports available online, obesity has overtaken smoking as the number one cause of premature death in the US and Australia.

Noakes said the similarities between smoking and consuming sugar-based products include addiction and the denialism by the producers of negative health effects.

SASA's nutrition manager and a registered dietician, Duduzile Mthuli, hit back at Noakes's claims by saying sugar was neither addictive nor toxic to the body.

She said a 2010 review by Swansea University concluded that there was no indication from human scientific studies that sucrose can be physically addictive.

Mthuli said the only way to gain weight is to eat more calories than you burn.

"Gram for gram, fat has more calories than sugar so it is easier to gain weight on a high-fat diet. A landmark scientific study conducted in Australia concluded that the rate of obesity is increasing, even though the consumption of sugar is decreasing."

But Noakes insisted that there will never be a drive to demonise sugar as there was against tobacco - as potential lobby groups had "sold out".

"The sugar industry funds most dietetic organisations globally so you won't find many dieticians speaking out against sugar."

Noakes himself believes he has reversed his diabetes since starting his diet.

After feeling lethargic and hungry while he was eating carbohydrates, he says he is now energetic and seldom feels hungry.

Comrades marathon king Bruce Fordyce - who is on the same diet, although he's not as strict on carb intake as Noakes - said: "I'm running unbelievably well."

Noakes believes most people are ill-informed when it comes to diet, saying:

Fats do not make people fat, carbohydrates do;

Fats, including saturated fats, don't push cholesterol up - carbohydrates do;

Most so-called wholegrain cereals are merely carbohydrate shells and are not wholegrain because the nutrients have been stripped out to increase their shelf life; and,

Carbohydrates create hunger pangs, which cause people to eat more.

But Mthuli disagrees. She said that as a main source of energy, carbohydrates were an important part of a healthy diet and the only source of fuel for the brain.

"To eliminate carbohydrates from your diet will be detrimental to [your] health. In addition, low-carbohydrate diets are costly as they consist of high-protein foods such as meat and [are] impractical for the South African population to follow."

Noakes said the medical industry was also complicit in promoting sugar and talked of how he watched his father die slowly from diabetes after being put on a high-carb diet.

"They said this is the right treatment. But it's not because the cause of diabetes is a high-carbohydrate diet.

"Unfortunately the [medical] profession is an industry and it's driven by profits. The more insulin that's sold to diabetics, the more profit the pharmaceuticals can make. And if we tell them to cut their carb intake, we threaten the income of the industry."