The More Mammograms You Get The More Harm It Does

Mammograms are in the news again, and it doesn't look good for those who continue to advocate using them to "detect cancer early" in asymptomatic populations. The science increasingly runs directly counter to the screening guidelines produced by both governmental and non-governmental health organizations claiming to be advocates for women's health.

Remember that only last November, the New England Journal of Medicine published a shocking analysis of the past 30 years of breast screening in the US, finding that 1.3 million women were over-diagnosed and over-treated for breast cancer – euphemisms for misdiagnosed and mistreated.

This finding, released cunningly from scientific embargo to the media on the eve of Thanksgiving, was so devastating in its implications that many either did not understand its meaning, or could not bear to accept the truth that the quarter of a century clarion call of breast cancer awareness month – get your annual mammogram or lose your life! – caused more unnecessary suffering, pain and harm to women than it is possible to calculate. The only calculable dimension of this world-historical failure is the billions of dollars that were made in the process of converting healthy, asymptomatic women into "patients", and if fortunate enough to make it through treatment, "survivors".

Now, a new study published in the Journal of the National Cancer Institute, finds that those women who follow the American Cancer Society's guidelines for the early detection of breast cancer, namely, annual screening for women 40 or older, are not only receiving no additional protection against aggressive breast cancer, but are experiencing greater harm through increased rates of false positives and unnecessary biopsies.

Diet Soda May Be the More Dangerous Alcohol Mixer

Cutting calories with diet soda may seem like a good idea -- as long as it's not at a bar.

"The results were surprising," said Cecile A. Marczinski, assistant professor in the department of psychological science at Northern Kentucky University, and one of the lead investigators of the study.

Researchers served one of three beverages: vodka added to a diet drink, vodka added to a regular drink or a regular soft drink with a vodka scent added so that participants would believe it was an alcoholic beverage. They then sat back while the subjects enjoyed their cocktails.

Men who watch television for 20 hours per week have almost half the sperm count of those who watch very little television or none at all, according to a study published on Tuesday.

US researchers recruited 189 young men aged between 18 to 22, questioned them about their exercise, diet and TV habits and asked them to provide a sperm sample.

Another big factor was exercise, according to the study, published online in the British Journal of Sports Medicine.

Men who exercised for 15 or more hours weekly at a "moderate to vigorous" rate had a 73% higher sperm count than those who exercised less than five hours per week.

None of the sperm levels was so low that the man would have been unable to father a child.

Capsaicinoids found in cayenne pepper, jalapenos, habaneros and other chilli peppers already have an established treatment role in creams to address joint and arthritis pain. They also promote fat burning, increase metabolism and even kill cancer cells. Scientists have now reported the latest evidence that chili peppers are a heart-healthy food with potential to protect against the No. 1 cause of death in the developed world.

The report was part of the 243rd National Meeting and Exposition of the American Chemical Society (ACS), being held in San Diego the week of March 26.

Past research suggested that spicing food with chillies can lower blood pressure in people with that condition, reduce blood cholesterol and ease the tendency for dangerous blood clots to form.

Researchers in Korea recently published evidence that suggests the mechanisms behind why capsaicin may aid weight loss. Many claims are set forth stating what the “natural” diet of humans is or should be, but in order to ascertain what constitutes the basic dietary requirements for optimal health, the problem must be approached from an anthropological perspective which encompasses the total dietary evolution and history of mankind, a scrutinization and syntheses of human diets from the earliest times to the present, the diets of mankind’s nearest relatives, the primates, and cross-cultural dietary comparisons of primitive and modern societies.

There are one hundred and ninety-two living higher species of primates in addition to humans. (30) Until recently, it was taken for granted that all monkeys and apes were vegetarians, but ethological studies (1, 2, 12) revealed that all primates, in their natural habitat, also eat small animals. The National Zoo in Washington attempted to breed the Amazon Golden Marmoset monkey in captivity, but failed until animal protein was added to their diet. (5) It had been erroneously assumed that they were complete vegetarians, but apparently they must have some animal protein in order to be fertile. With the addition of animal protein, they reproduce rapidly in captivity. (5)

Taylor Swift just announced a sponsorship deal with the love of her live Diet Coke. Infowars.com feels that she should be made aware of the dangers of aspartame the main sweetener in diet coke which is linked to many adverse health effects. Please get this video to Taylor Swift and hopefully she can educate herself and her fans.

Death By Doctor vs. Death By Firearms

In 2010, there were 14,043 homicides in the United States. This was 15th leading cause of death according to the CDC mortality statistics and a Wall Street Journal review for causes of death. However, when one isolates the number of deaths by firearms, the number of deaths caused by guns drops to 9,601.  The total number of medically-caused deaths in the US very year is 225,000. An American has a 23 times greater chance of being killed by their doctor than by a firearm!

Perhaps we should be looking at the Bovine Growth Hormones (cancer causing) put into cattle which makes its way into the human population by way of meat consumption. We ingest these dangerous substances and literally, the entire country is on a secondary form of steroids. Maybe the country should question the wisdom of taking the flu vaccine. There is not one shred of scientific evidence which supports the use of the vaccine which would serve to justify the hundreds of thousands adverse reactions. The use of the flu vaccine defies conventional wisdom. How does one make up a vaccine a year before the “new” strain appears. Is this medicine by crystal ball? And where is the supportive data? With this kind of voodoo science, no wonder death by doctor is the third leading cause of death in the United States. 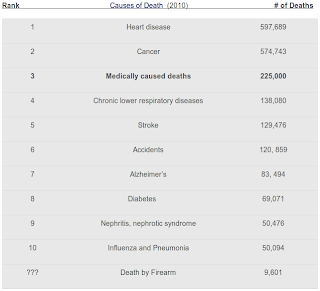 Read the full article at : http://www.thecommonsenseshow.com/2013/02/03/death-by-doctor-vs-death-by-firearms/

ALSO READ: Prescription Drugs vs Guns: Staggering Stastistic Tell The Rest Of The Story, You Decide!

Your Food is being poisoned - The Ultimate Secret Exposed


Food - The Ultimate Secret Exposed full version
http://www.youtube.com/watch?v=WMwXlikoFrM
Alex Jones addresses one of the darkest modes of power the globalists have used to control the population-- food. The adulteration of the planet's staple crops, genetically-altered species and intentionally-altered water, food and air all amount to a Eugenics operation to weaken the masses and achieve full spectrum domination.

People the world over, but especially in the United States are under chemical attack. Deadly and dangerous toxins ranging from Aspartame to Fluoride, GMO, Mercury-tainting, pesticides, cross-species chimeras, plastic compounds in chicken, high fructose corn syrup, cloned meat, rBGH and new aggressive GM species of salmon have all entered into our diets and environments-- whether we want it or not.

Many of these substances knowingly cause or are linked with sterility, low birth weight, miscarriages, smaller or deformed offspring, as well as organ failure, cancer, brain tumors and Death itself, what you DON'T know about on your grocery shelves can hurt you. Further, Alex demonstrates that a pattern of buried studies, fraudulent statistics and a will reduce global population all point to the deliberate criminal poisoning of the food and water supply.

THIS IS REALLY HAPPENING!!!

Governments and the Medical Establishment have been occupying the public's minds with tobacco regulations, scaring people with horror stories about tobacco, to steer the public away from much worse dangers, real true dangers like vaccines, poisonous, cancer-causing additives to food, water and household consumables.

Tobacco smoking is NOTHING COMPARED to what your government and the medical establishment is doing to you and your children. WAKE UP!

The establishment media and the scientific dictatorship are promoting brain-eating vaccines that virtually lobotomize people and rewire their brains into a state of subservient compliance so that their natural instinct to get angry and rebel against the tyranny being imposed upon them is neutered and sterilized.

"Academics say they are close to developing the first vaccine for stress -- a single jab that would help us relax without slowing down," reports the Daily Mail.